This post is a little old now and there are many other better bluetooth speakers on the market. 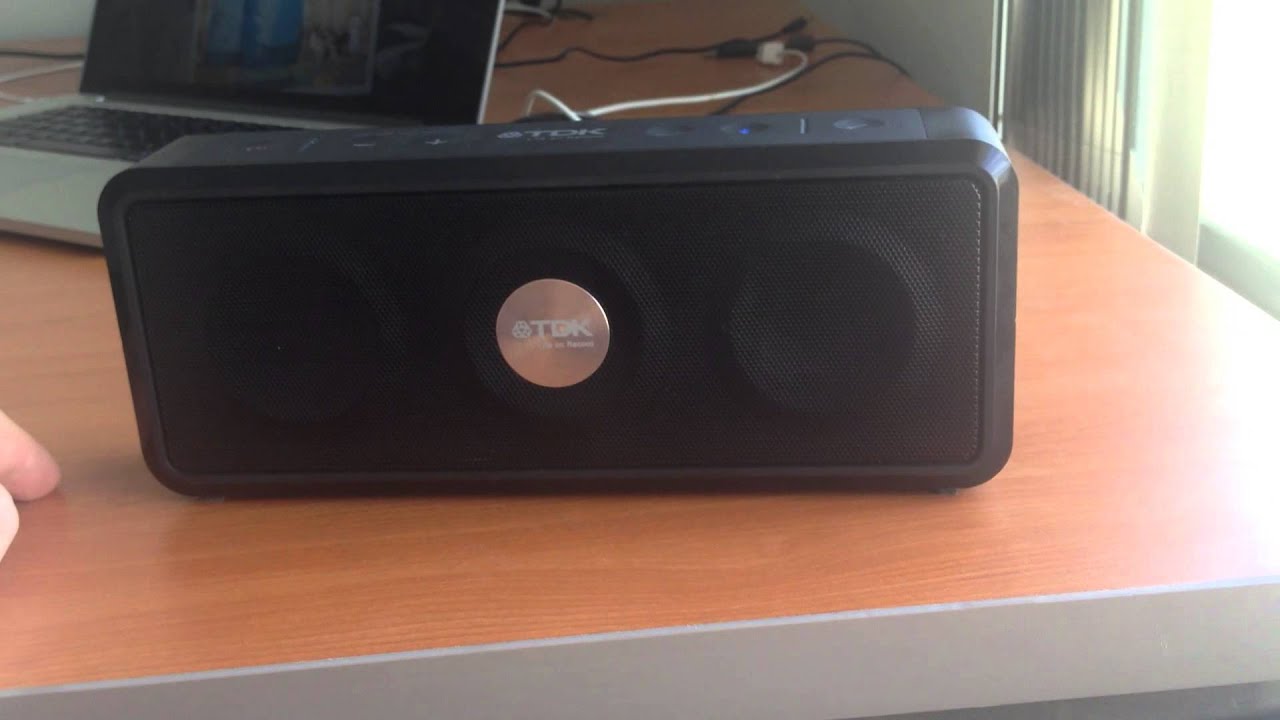 Update: The links in this article have been redirected to the A33’s successor, the A34. I’ve tried this out in a local store, it’s almost the same product with a cosmetic improvement, the addition of skipping buttons and NFC for Android pairing.

Warning for readers : This small speaker has exceptional sound for the price and will be your best choice hands down for use as an indoor speaker. But it’s use as a portable speaker is extremely limited by a battery that degrades quickly over time, something I was unaware of at the time of reviewing. It is replaceable, but for portable music you’re better off with a unit with a lithium battery.

If you like: music to sound good, good design, minimal clutter, moving around, you’ll love the TDK Life on Record A33 Wireless Weatherproof Speaker

I only review the best things on this blog. Out of the range available, the TDK A33

provides much better sound, build quality and amazing usefulness for its price.

To let you know how much I love this thing, it has replaced my high end B&W 200 series and dedicated amp, significantly reducing desk clutter and taking away very little enjoyability.

I discovered the A33 in my local electronics store. It was unusually weighty for it’s size which piqued my curiosity. I connected it to my phone via bluetooth and played a favourite track. I could feel the bass in my hands when I picked it up. The sound was crisp and clear – no tinniness. I was blown away by this phenomenal little unit.

I also tried the other market leaders in store. Sorry Jawbone. The A33 is a similar size, cheaper, and simply better. Let me break it down for you.

It’s built like a brick. Compared to the other speakers I picked up, the A33

is heavier, but it’s also much sturdier. I’ve trucked it around in my bag. I know it’s been smashed in luggage handling – it’s even been soaked with the rest of my luggage. The result? It’s perfectly working and attractively worn. See this video of someone hosing it for a good five minutes.

The weight issue is a compromise. I don’t think of it as the lightest speaker in the world – but for the size it the best sound I’ve heard. I wouldn’t take it with me backpacking, but for light travel it’s perfect.

UPDATE: Alternatively, there is a lighter version of the A33 newly available, that seems to be a third of the weight going by the listed specs. Check out the A26: TDK Life on Record A26 Trek Wireless Portable Speaker.

While the treble emanates from the two forward 2.5″ drivers (3.5w), the bass comes through a 2.5″ subwoofer (9w) and the rear facing radiators.

It’s loud. I hadn’t turned it up full until about 10 months after owning it when someone else cranked it at a party. It filled the room like a dance hall. Amazing.

Bass…Yes, it has great bass which you can improve further by placing it near a wall, or pointing it into a corner to bounce the sound throughout a room.

The A33 sits on rubber feet which keep it in place and eliminate rattle. The unit is heavy enough that the bass seeps into what it’s sitting on instead of floating off into nothingness.

It’s good. You get many many hours on lowish volume and at least a few on mid. It’s rated for 6 hours, but you can get more out of it. (at first – as said, that doesn’t last too long).

What’s remarkable is that you can turn the battery off when the device is plugged in, to extend your battery life. Mine spends most of it’s time plugged in on the desk. A simple flick of a switch and your battery is back on, you pick it up and take it with you.

UPDATE:After a year and a few months the battery isn’t what it’s used to be (it lasts about an hour or two on lowish volume). If portability will be your main use for this unit, as opposed to desk or kitchen use, you might want to consider further.

The A33 connects via bluetooth or 3.5mm. It remembers the last BTR device it was connected to and will reconnect when turned on, if possible. The 3.5mm input makes for faster and easier connectivity if you are up for another cable across your working space / bedroom.

The A33 achieves it’s great sound over bluetooth with A2DP and in-built AAC decoding. That’s fancy for saying it’s not normal bluetooth and you can’t hear any compression. You don’t know it’s bluetooth – it’s as good as airplay and I doubt even an audiophile could tell it wasn’t plugged into the source. In short – 100% listenable for even discerning ears.

You can charge a USB device using the provided port. Handy in that I now have an extra USB port to plug things into, leaving my computer freer. I can’t stand having a million things plugged into the computer – I like to be able to pick it up and move at a moment’s notice.

The good news is the USB input provides a 5v charge – the same as a standard iPhone USB plug – which means it won’t damage your battery by charging too fast like many other USB ports (10v is designed for an iPad, but the iPad will still charge).

When paired with your phone, you can answer incoming calls using the A33. There’s a dedicated button for this so you don’t need to touch your phone it to answer a call. So if you’re at your desk using your phone for music via bluetooth, you won’t have difficulty receiving calls on the A33.

I see this as a perfect desk or kitchen music unit. It wouldn’t be great for backpacking, but if you move around a lot it’s spatially economical.

None. I mean it. There’s nothing I don’t like. I’m simply a happy customer who has spent a very reasonable amount of money to get something that perfectly fits his needs.

Check it on Amazon, they seem to have a pretty good price: